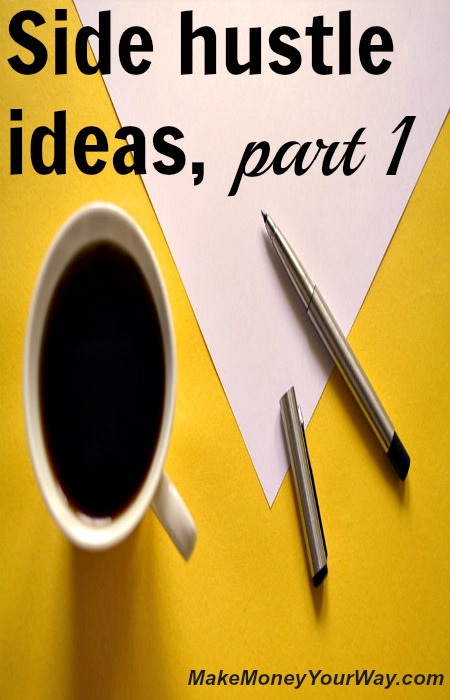 A reader wrote to me asking for side hustle ideas, and I thought I would ask around for things that were cool, unusual, easy, well paying, any side gig that wouldn’t particularly come to mind to anyone.

So here is the first batch of side hustle ideas, courtesy of my blogging buddies. Enjoy!

When I was in grad school, I was on a pretty strict stipend, so I would tutor high school and university students in general science, chemistry, math, and physics. I just posted an ad online saying I was a PhD student looking to tutor, and the emails came flooding in. The going rate around here was anywhere between $25 – $50 per hour, depending on the subject level. I would just plunk myself in the university library or campus coffee shop, and schedule my students back-to-back a night or two per week, that way I minimized downtime (the hourly rate was great, but it could be sporadic). In the last year of my degree, I made an extra $2,500 per term for 5 – 10 hrs per week. And the experience then helped me with my teaching skills, and getting more students to tutor. Talk about a win-win! 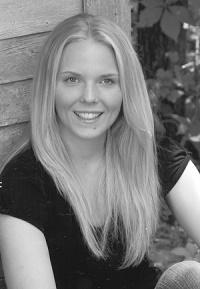 I have and interesting side hustle – “Grandpa Sitting”  This sounds crazy, but I and my husband have provided services for older individuals who need someone to constantly supervise them while their spouse or children work.  Normally, these individuals would have a home nurse, but the people we stay with are not far enough gone that insurance will cover the nurse.  Instead, we charge about $60 a day – and are allowed the perk of bringing our daughter with us – to give the individual their medicine on time, and generally keep them out of trouble and away from harm.  It’s very easy money, we get to bring our daughter, and the older people love seeing our 10-month old!  Believe me, it’s some of the easiest money I’ve ever made!

We started with one older neighbor, and then we just kept getting jobs through word of mouth.

In the last year, we’ve made an average of $600 a month, working two weeks out of every month.  We’re hesitant to take on any more work than that, but if we were there would be as much work as we wanted!

Possibly my best side hustle was helping behind the scenes with a science documentary some years ago. I was on a discussion forum related to the subject, where I often hung out, and got approached by a researcher who had a few questions.

After emailing back and forth, and speaking to his boss, they offered me a freelance position answering their questions, discussing the script and introducing them to useful people. All this came from simply following my passions and keeping my ear to the ground.

Frankly, it was so fun I would have done it for free but for a few short evenings replying to their emails I earned several hundred dollars from the gig. 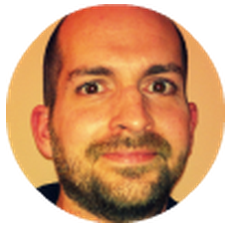 Another side gig that has been as much for fun as it is money revolves around my passion for exotic pets. Numerous times over the years I’ve bred my tarantulas, leaf insects, praying mantis or whatever and there’s a surprising market for such things!

A baby tarantula can sell for $10 or more here in the UK, and when a single female can produce 100+ babies a single breeding can be very profitable indeed! You can sell them on dedicated forums, or put postcards in shop windows (with their permission) because while it’s not as profitable, I always find it is a great way to meet new people with similar interests.

While they may be the most unusual side gigs I’ve used, I’ve also done a fair amount of web design over the years. It seems that as soon as most people discover you know about “all that internet stuff” they reveal an idea for a website they’ve had and ask if I can help them build it. Some of them balk at the quotes I give but quite a few follow through and get me to build their site in my free time. 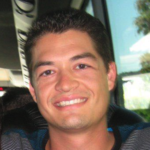 I first found out about Uber when my friends told me about this new mobile app that allowed you to call a taxi.  The neat thing was though that Uber drivers weren’t taxi drivers.  They were ordinary people just like you and me.  I eventually signed up as a driver and haven’t looked back since.  It’s been 4 months since I started driving and I even developed a blog and podcast to chronicle all of my experiences.

The money isn’t going to make me rich but you can definitely make some decent coin during the week.  And on holidays and Friday/Saturday nights, I’ve made up to $40-$50/hr!  The best part about the job though is that it’s so flexible and it’s actually fun.  I can drive whenever I want and I get paid to meet new people, talk to them about their lives and drive them around for a bit.  What could be better than that? 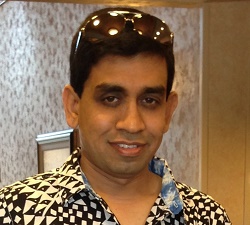 Although blogging is my biggest and highest paying side hustle, I did try earning money by flipping used goods. I am no longer continuing this any more to spend more time on my blog. I created an inventory of items we purchased on garage sells, from craigslist and from eBay purchases. We sold them in Craigslist and eBay with good margin, sometime for double the price. We earned around $400 per month on average through this route.

Also, my wife has a side gig of Photography. She’s a wedding and event photographer and charges flat $100 per shootout and $50 per hours on top of that. She usually gets 2-3 orders a month.

-SB from One Cent at a Time

If you want to share your unusual, weird, unheard of or well paying side hustle with my readers, please drop me a line at tdmpauline at gmail dot com, thank you!

This post was featured on How to Save Money Guru, thank you!