Good morning! Today Troy continues about the investing for beginners series. You can check the previous posts about What are stocks and how to value them, How does Currency Trading Work, How are Currencies Traded, Investing in Commodities, What Fundamentals Affect Commodity Prices, What are ETF’s, What are Options, How are Options’ Prices Structured, Investing for Beginners Part 2 – Different Investment Strategies, When does Buy and Hold not Work, An Unconventional Approach to Buy and Hold, An Unconventional Approach to Buy and Hold Part 2, How the Investment Advisor Game is Played, An Introduction Into “Secular Investing”, Don’t Short When it Comes to Secular Investing, An Introduction into Trend Following, An Introduction into Technical Indicators, When does Trend Following Not Work, Risk Management for Trend Followers, Why Trend Following Isn’t that Useful Today

In the last post we just concluded our Trend Following series. Now, we’re going to cover a new investment strategy that has worked exceptionally well across various markets (stocks, commodities, currencies) since the 2008 market crash. This strategy is known as Contrarian Investing. Contrarian Investing is exactly what it sounds like – if everyone else is selling and the market crashes, you should buy into the market. If everyone else is buying and the market spikes, you should sell the market. Contrarian investing is based on a simple tenet: the crowd (when it moves in one distinct direction) is always wrong.

Obviously, this belief is not 100% true. What makes Contrarian Investing truly successful is that this investment strategy rests on a simple fact of the universe: mean reversion. When things go to one extreme, they will reverse towards the mean and go the other way. This also aligns itself with the concept of cycles. The whole universe travels in cycles. If the economy goes to hell (deviates from the mean), sooner or later this bad cycle will end and the economy will rise (mean reversion).

Similarly, when the market moves extremely quickly in one direction (e.g. a sharp sell off or a spike in the market), contrarian investing states that the market will rebound to the other direction.

When to Buy and When to Sell

However, the critical question here is: how do you define “everyone else is buying / selling?” How do you quantify the strenght of a market sell off or a market strength? After all, only when you quantify something can you make objective, unbiased investment decisions. Extremes are known as Oversold and Overbought. When the market is Oversold (very intense market selloff), it’s time to buy. When the market is Overbought (very intense spike), it’s time to sell. To quantify Oversold and Overbought, we have 3 techniques.

Previously we have already discussed the definition of technical indicators. There is a specific type of technical indicators for contrarian investing called oscillators. Oscillators oscillate (waiver) around a mean line (average). When an oscillator reaches an extreme, a BUY/SELL signal is generated. When the Oscillator rises above a pre-determined number (e.g. 80), the market is considered to be Overbought. Thus, it’s time to sell. When the Oscillator falls below a pre-determined number (e.g. 20), the market is considered t obe Oversold. Thus, it’s time to buy. There are many types of Oscillators, but they all generate similar signals at similar times. Below is an example of an oscillator: 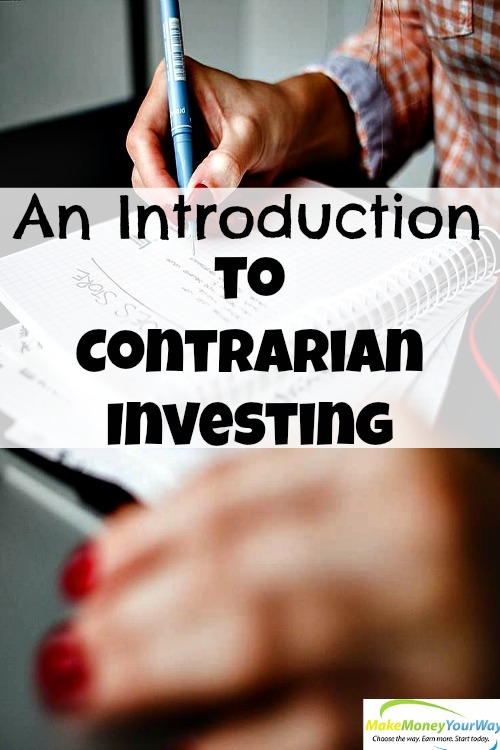 As the saying goes (which is a pretty big cliche), “history repeats itself”. Contrarian investors and traders use time as a measurement for “how extreme is the current sell off / spike in the market?” If the current sell off / spike extends beyond any historical precedent, then this is a really EXTREME situation, and the market should reverse to its mean (go the other way) any moment now. Here’s an example.

Like using Extreme Time, using Extreme Magnitude also depends on history. If the current sell off / spike extends beyond historical precedent in terms of magnitude (what % has the market fallen/risen), then the odds of a market turn around are high. Here’s an example.