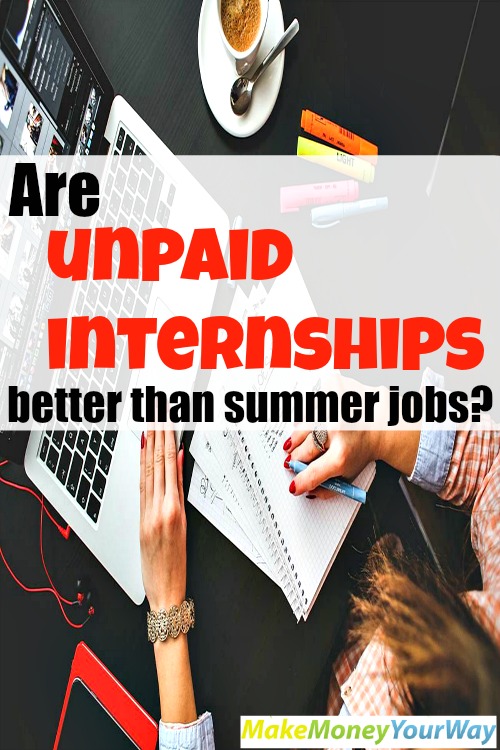 We have talked recently about the arbitrage between improving your career and pursuing side income outside of your day job, today I will talk about another situation where you need to think long and hard: taking an unpaid internship versus getting a summer job.

As a student, I never, ever got an unpaid internship. When I was around 13, I started helping out my aunt with inventories at a bookshop, and even back then, the owner gave me about $20 for my day. That was my first “paycheck” in the real world, as I had been babysitting my cousins and some neighbor’s kids but this time I was in a real company. In high school, I got a ton of little jobs thanks to my mum, from piano teacher to tutor to house sitter to lunch lady at her primary school to bagging groceries, I was everywhere money could be made.

So moving on to college, I was very reluctant to finding an internship, so I could make coffee for free for the sake of putting a big company’s name on my resume, when I was getting paid to make coffee for customers at McD.

First, spending time working for free means you are missing out on spending time working for money. Say you work for five years of college like I did, for an average of $1,500 per month. You would make $90,000 over the course of 5 years. That is quite a dent in your student loans isn’t it? In my case, I paid for my college and expenses cash and even graduated with $25,000 in savings. 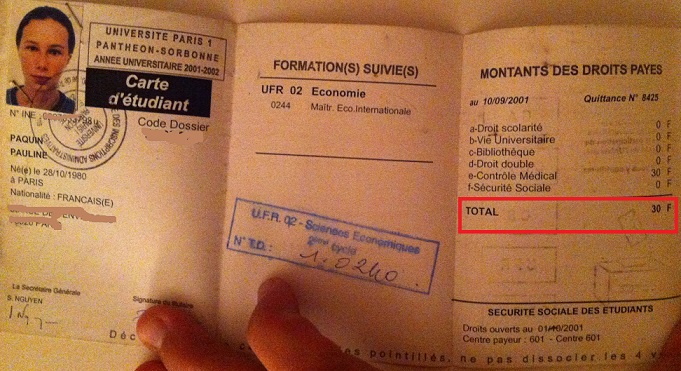 Of course, paying 30 francs, or around $5 for a year of Sorbonne University tuition made things much easier.

Had I gone the internship route, I would have had a better resume to go find a job in the corporate world. That’s a maybe, as for the last two years of business school, I worked for IBM in marketing and sales and that is a pretty solid experience when you put two years of real part time work on your resume instead of a coffee run internship.

But say you only have burger flipping on your resume and Bob has an internship. Will Bob’s first job land him $90,000 MORE when they hire him? Probably not. Say Bob gets an extra $10K because of the internship. You have 9 years to prove your worth and keep working hard to get promotions to reach Bob or get above him in the pay scale.

Meanwhile, Bob’s student loans are at 8% interest on the $90,000 he was not able to repay with jobs, costing him $7,200 a year. The real difference between a $10K higher starting salary without the student jobs comes down to $2,800 per year in that case.

Proving that you can get all kind of odd jobs is actually a plus on your resume. During your college years, that is. If you are 45 and haven’t held a job more than 3 months, there may be a problem.

But my list of jobs, for as meaningless as they could have been (I had to dress like Cinderella during her evil stepmother era to tend tables at Disneyland for goodness’ sake!), shows that I was motivated and willing to get ahead. Unlike Bob who only accepted the internship because Dad insisted he should leave the frat parties and threatened to take away his allowance.

Sure it would be awesome to work pro bono at a firm whose name will make recruiters want you even more. But what your resume says is that you are not afraid of hard work, you got those little jobs on your own, and you are probably more mature than sheltered Bob.

Internships to build your skills

I only see value in internships when you need to practice a skill, like medicine, although interns start getting paid pretty early in their apprenticeship, or when you need to network a lot to build your career, like a lawyer would. Getting started on your client portfolio years ahead of your peers is great, assuming your firm’s clients are happy to trust a 22 year old with their important affairs.

When I was in business school, learning so much at a company on the side, the theoretical classes seemed pretty dull. Some of my classmates were missing school to keep working at their company instead, saying they were learning more than in the classroom.

The same would apply to trade school, when nothing beats practice. Still, you should have a fair compensation for the amount of work you put in. In France, there is a minimum wage below minimum wage for the 16-18 year old, and they are in the process of regulating internships to include a minimum stipend which at least covers your commuting and food costs.

So when hesitating between a part time job and an internship, be sure to weigh in all those aspects, and the long term financial impact of getting a debt-free start in life.