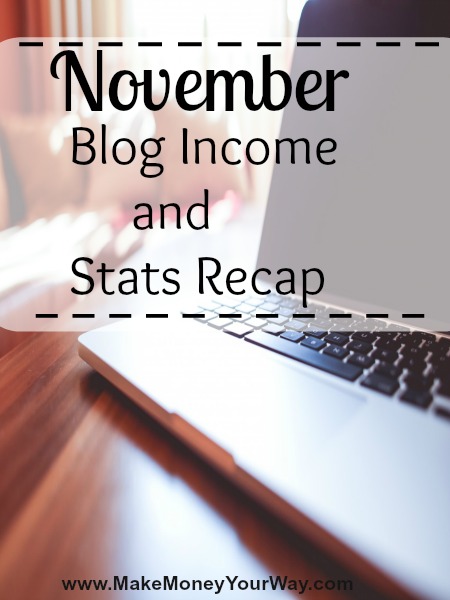 Welcome to the 17th blog income and stats recap of MMYW! November was spent mostly away from the online world. After my breakup a few months ago, I am in the process of building a new house since the one I live in currently is half owned with my ex, and that took all of my time and energy. Every time I wanted to get back to the blogs, either something came up, or I was too tired and ended up watching TV shows instead, or I was paralyzed, unable to know where to start, and ended up on Facebook instead. I am slowly working through my todo list, which is mostly writing posts since November was also the month I posted the least of my own content, and am taking December slow as I expect less readers with the holidays and stuff, but I want to get ready for the new year.

VA and staff writing $275. I gave the VA a raise in July after a year of service. She has been looking for more hours, so if you need one let me know

EXPENSES TOTAL $275. I had a few plans to invest in my sites but no time to do so, so the projects are postponed at the moment.

$1,550 This is a mix of Adsense, affiliate sales, and direct advertising, plus a little income I got from my ad referral network’s commissions. Contact me if you are interested in joining the ad network!

A low month for RFI, which was to be expected since I probably published about 4 of my own posts, a few guests posts from blogger friends and short posts promoting my content on my other sites. Time to get back in the game!

$1,360. MMYW is also down over $1,000 compared to last month, there was no new affiliate content, not much content of my own as well, so we can only go up from now.

$3,615.  On the other hand, SS is up $1,100 against last month, and we are back to the pattern of this site making more than the other two combined, which leaves me scratching my head since it was treated just the same in November, but who am I to complain?

TOTAL $6,535. A great month, down about $600 from last month but I’d say I am up in terms of hourly rate, I barely touched the sites this month.

10% of blogging income will go to sponsor young girls’ education in my village. I have spent most of my money as per the last update,  left only with $300-ish so it is awesome to have $625 to add to the pot. THANK YOU for helping keep this site what it is and contributing to its monthly income!