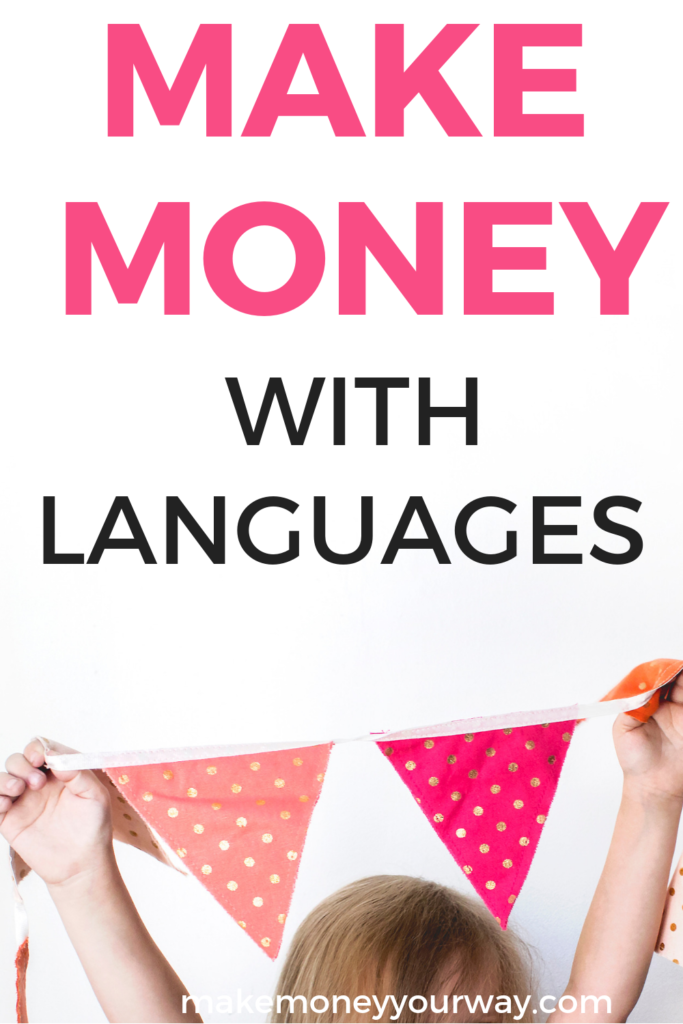 Americans who travel abroad for the first time are often shocked to discover that, despite all the progress that has been made in the last 30 years, many foreign people still speak in foreign languages. – Dave Barry

I speak a few languages, among them English, French and Spanish to a level of fluency that allows me to make money with it. This website is one fine example of how I make money because I speak English. I will go into more details below, it is sufficient to say that over the years, being trilingual has made me a lot of money being monolingual wouldn’t have. How can you make money thanks to your language skills?

Ask for more money at your day job

I was hired at my last job because I spoke three languages well, and another two they could use too. They didn’t care about my Master in Business or my previous work experience, or that I didn’t know much about computer languages and it was a job that required coding skills. They said learning HTML is like learning another language so you can do it. It was true, computer languages are simpler than learning the pluperfect.

Once I was trained, I could support foreign customers, and my colleagues could not, so I was more valuable than they were. I got a big raise. If your language skills are going to be needed at work, you can ask for more money than a person who just speaks English. You open your company to new markets, can reach new customers, can translate their website, and so on.

Learning languages is not that expensive, you can borrow books at the library or learn online, and you can also finance a language course with companies like Credit Noble. Just figure out the return on investment to see if it is worth it. For me, it was a 30% raise over the course of a year, so the answer is a big yes.

Another way I made quite a bit of money with my language skills was teaching French and Spanish to English speakers. I worked for myself and gave private lessons at night and on weekends on top of my day job. I also worked on behalf of a few language companies for their corporate clients about to be relocated by their firm to France or Switzerland, and I gave them crash courses before they moved.

My usual rate was $50 per hour, although I got up to $90 per hour. With transportation, it took about an hour and a half of my time to give a one hour lesson, but the money was much better than baby-sitting or tutoring kids for homework.

A friend of mine is teaching languages via Skype, with much lower rates, but in the comfort of his own home, and this is a location independent job, so he can be on the beach in Honolulu and still make money.

Make an app or a language program

This one requires that you have computer skills on top of your language skills, although you can hire out most of the tech process. Many people are looking to improve their language skills, and if you know how to position your product properly, you may be able to sell it to them.

It can be a language app like duolingo,  a small conversation book for your smartphone, or those funny programs that will listen to you talk and then talk back, saying what you just said in another language.

More and more people are traveling internationally each year. The world is getting smaller, and the need to communicate bigger. I can’t help you with the details of how to start making such apps, but I am confident that with proper marketing, there is money to be made.

Another way I made money with my language skills was translating documents and websites for people. Most of my jobs I got from word of mouth. It is a tough world online to get translation jobs, as many people highly bilingual from lower cost of living countries will be at 10% of what you bid for.

But if you know people who may be expanding internationally or looking for a translation of their manual, work documents, etc. it is a great way to make extra money.

I mostly translated websites, sometimes within the software, sometimes they would send me a Word document with the content of the website and I would translate in Word. I also translated my own writing when I wrote for travel websites and they launched the same site in a new country I spoke the language of. It took way less time as I knew what I had written before in another language.

Usual rates are around $0.10 per word, then you can ask extra if the text is technical, if you have to upload it online or perform another complicated action.

Companies such as 1st Transnational marketing translations can hire you as well, rates are generally lower but they will do all the work of finding clients, following up etc. which means your hourly rate will only be spent translating, not doing back office work.

This is where this website pops up again. If I had started my personal finance website in France, I would have had a readership limited to residents of the Hexagon. Actually, there are a couple of websites who tried to take over the PF niche, one is a Ramit Sethi copycat, and the worst is he admits it, the other one tried to tackle the coupon/frugal niche and is pretty painful to read as well.

France is a nation of thrifty people. Our grandparents lived through the war, our parents grew up with rationed food still, they mend and make do, they are not in debt except for a mortgage that will be long paid by the time they retire, they have a cushy pension courtesy of the French government. There may be things to talk about, but people who would listen are far and few. So thanks to my English skills, I was able to start two blogs which generate a nice little side income, and to showcase my reading to any English speaker in the world. RFI has readers on the five continents, it would be a miracle if the same had happened with my French blog.

One step further, I was once hired as a business developer for a company. Their point was “you have lived and traveled all over the world, you may know business concepts that are not being developed here but could be successful, give us ideas and we will fund the projects”. Thanks to a multilingual background, I was able to get several jobs that were otherwise out of reach, but people were ready to gamble on me because I spoke several languages.

Have you ever got a job thanks to your language skills? What would you add to my list?

This post was featured on the Yakezie Carnival, Mo Money Mo Houses, Control Your Cash, thank you!