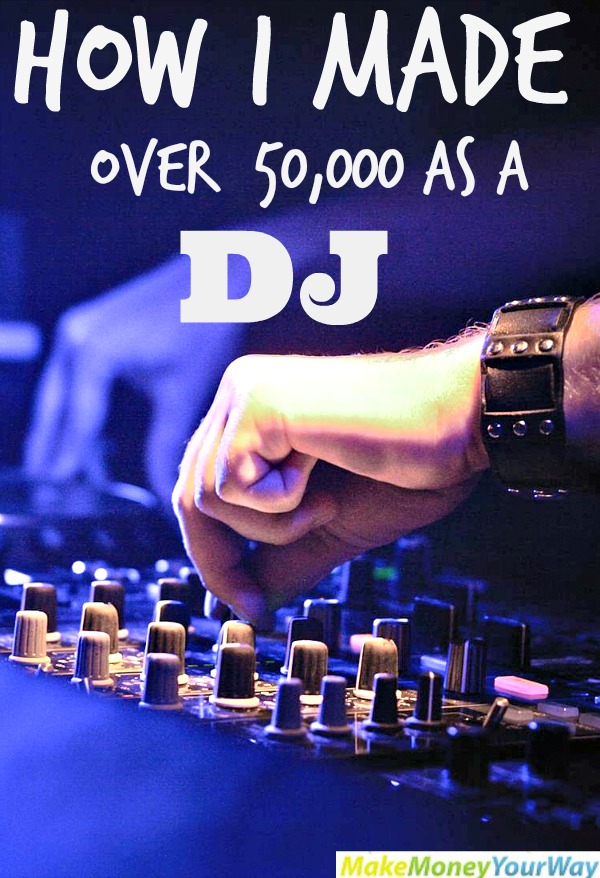 Good morning! Today Evan talks about how he made over $50,000 as a DJ in his spare time. Isn’t that a cool side hustle? Let me know if you would like to guest post on Make Money Your Way and talk about how YOU make money.

When not behind his desk at the bank, you can find Evan behind the decks as a local DJ. He also runs Financial Independence, a personal finance blog focused on eliminating debts and building sufficient investments to cover his living expenses. You can follow him on Twitter, Google+ or  Bloglovin’.

In 2004 I borrowed a CD from a friend to listen to while working on a school project. Unlike any CD I had heard in the past, this one was a compilation of different songs, but a DJ had manipulated and mixed the different tracks together to make one continuous piece of art. I was hooked instantly. This was something I’d never heard before – little did I know that it would become a significant part of my life.

I scrimped together nearly $1,000 from my after-school job and bought a basic set of DJ equipment. Browsing turntables for sale, you can get some really quality equipment for decent prices nowadays! Countless hours were spent hunched over this gear in my bedroom, tweaking knobs, sliding faders and generally creating enough noise to annoy my parents. One day I decided it was time to start earning my investment back – I opened up the phonebook and started calling each of the mobile DJ companies to try and get a job. Each call I would explain that I had my own equipment and would love to opportunity to help out. I worked my way through the book alphabetically, and by the time I got to ‘C’ I’d picked myself up a new weekend job of being a mobile DJ.

Every weekend in the warmer months I would put on a suit, drive to a nearby winery or hotel and provide the music for weddings. In winter I would DJ for blue-light discos and occasionally at a local pub. When starting out, my boss would shadow my every move at each event – teaching me which songs go well together and which of the 60’s and 70’s tracks were bound to get Aunt Gladys onto the dance floor. At the end of each night I would get a cheque for around $150 – only a fraction of what the owner made, but a solid income for a teenager. Pretty soon I was trusted to run things on my own.

One eventful evening I got a last minute call asking if I could DJ a wedding at a large convention centre, so I quickly shaved, put on my suit and rushed to the venue. I was stopped at the entrance by security, there was no wedding. In my rush I had misheard ‘wrestling’ as ‘wedding’. The 3 hour mixed martial arts tournament which followed was an interesting change of pace – each fighter provided me with entrance music on CDs to play as they were introduced to the ring. One CD started skipping so I quickly swapped to the next song I could find….”Why Can’t We Be Friends” by WAR. Judging by the look on the fighters face I was lucky to not meet him on the way back to my car afterwards.

When I moved away from home to go to university, my DJ skills were what kept a roof over my head. Instead of playing weddings, I would DJ on the university lawns over lunch periods – once even getting offered a regular slot at a strip club (which I turned down). I would play at bars and nightclubs 4-5 nights per week and it wouldn’t be uncommon to make $500 a week after taxes (sometimes even over $1,000). It didn’t take long for me to realise that while I could play the most popular nightclubs in town and make $30/h, the quieter bars with few patrons were desperate to attract DJs and I could charge $50-75/h – even if it meant sometimes playing to an empty room. The other advantage of working in smaller venues is they will keep the same DJ playing all night as opposed to swapping every few hours.

I graduated from university in 2010, but I have still kept my side hustle. Every Friday I start work at my normal job at 8:30am and upon finishing drive straight to a local bar and play until 3am. It makes for a long day, but after a good sleep-in the next morning I’m always glad to have the extra few hundred dollars in my pocket.

When co-workers find out I DJ on the weekend, the most common question I get asked is if I want to eventually be a professional DJ. While I enjoy being able to focus my attention on something different for a few hours each week, I don’t see my side hustle being a sustainable full time career. Despite wearing custom-made earplugs, eventually I will damage my hearing if I am doing it full time. Different venues also attract different crowds – I already feel like a fish out of water when a bar has an 18th birthday, so I don’t want to ever become ‘that old guy’ who is past his career.

The second most common question I get asked is why I don’t quit – wouldn’t I prefer to have the weekend to myself? Because I have cut back my hours to one or two nights per week, I still enjoy what I do as a side hustle and haven’t burnt out. I’m quite happy to plug in my headphones and tune out from ’normal life’ for a few hours. Additionally, I always get free drinks at the bar and a decent wad of cash at the end of the night.

I’m definitely not a ‘superstar’ DJ, I don’t go out clubbing or to bars unless I am working and am quite fond of having a quiet night in front of the TV. Despite this, the income generated by my side hustle has allowed me to maintain a pretty decent standard of living while still being able to save a house deposit and purchase a near-new car. Some of my success has just been luck, but I’d encourage everyone to find a way to turn their hobbies into an income stream.