Hi there! Today the lovely Tonya will explain how you can make money as a TV or movies extra. Let me know if you would like to share a guest post about your side hustle too.

Tonya is a beach volleyball-lovin’ video editor and writer living in Los Angeles. She chronicles her journey of becoming financially independent in her personal finance blog Budget & the Beach, and building self-confidence in her sassy new blog It Started With Lip Gloss . You can follow her on twitter at @beachbudget. 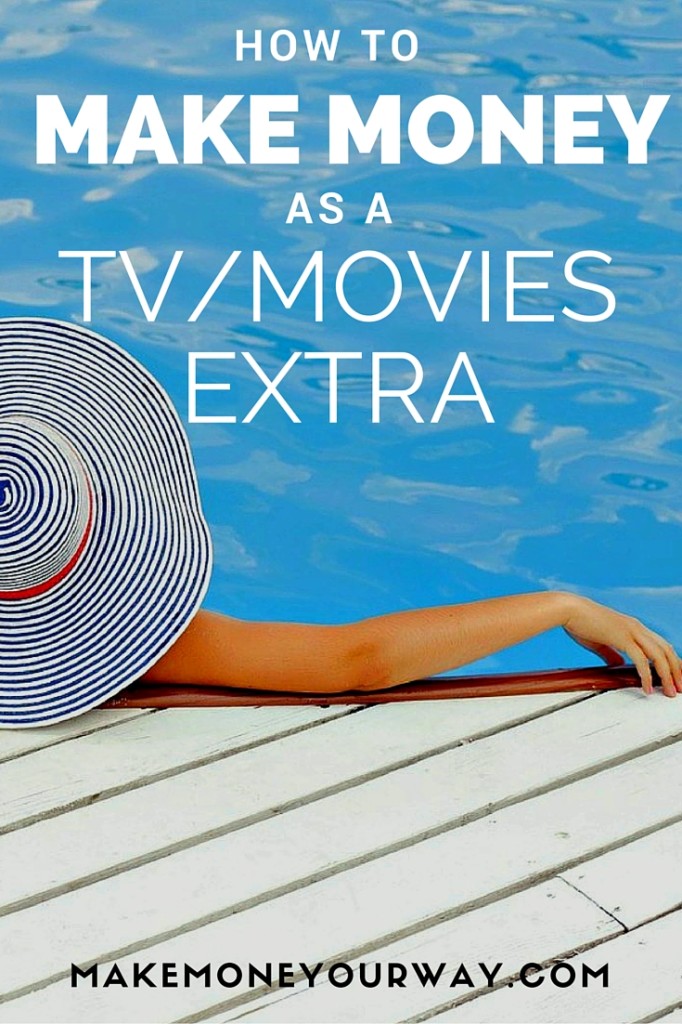 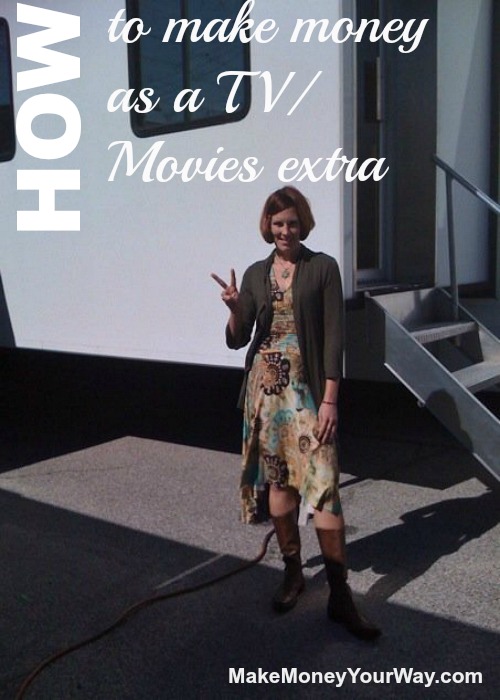 When I was a little girl, I wanted nothing more than to be in the movies or on TV.

I even remember asking my mom if I could be on The Brady Bunch, because I was so jealous of Susan Olsen, who played Cindy on the show. If she could do it, then why couldn’t I?

And I even went so far as to look up acting classes in the phone book (pre-internet days) in the greater Detroit area. Well, that didn’t happen.

In fact I never really even got involved in community theater, so unless I planned to make a huge effort as an adult to try and be a movie star, I best be findin’ another career. I chose to work behind the scenes instead and majored in television production…what I thought was the next best thing.

So when I moved out to LA ten years ago, I thought it might be my chance to dabble in the acting biz just to taste it, and what better way than being an extra.

As luck would have it, my friend Sarah is a writer/producer on the TV show Parenthood.

I went with my friend Dave, and although we got paid through Central Casting, we avoided the usual route of going through them to get the job since we knew Sarah.

What struck me at first was how logistically crazy everything is. From forms to fill out, to costumes (yes, even us background folks get fitted for appropriate wardrobe), to shuttling the extras back and forth between sets…let’s just say the crews on these shows deserve every penny!

They shot several scenes, which would be in several episodes, at a local bar. The time between scenes took one to two hours, so us extras (there had to be at least 100 of us there) were camped out in an air-conditioned, double-wide trailer, complete with water and snacks. When they were ready for us, they would walk us over to the set and place us systematically to what would look best. I was usually placed with my back towards the camera, speaking to a complete stranger over our fake dinner as if we’d known each other for years.

The other funny thing is you have to pretend to have a normal conversation by just mouthing things to each other without making any noise, which will be added in post-production. So now when I watch TV shows I can’t help notice extras and laugh when they pretend to know each other.

At one point in the day, the casting people needed a guy to say one line to actress Lauren Graham, the lead in the show, who was working behind the bar. My friend and several others were asked to read the line. He didn’t get the part, but if he had that would have been an extra 1k, and automatic membership into the Screen Actor’s Guild. And this is someone with no prior acting experience!

The last scene of the day, Dave and I finally got a chance to get some “screen time.” We actually sat at the bar where Lauren was having a conversation with a guy next to us about her daughter going to college. Dave and I faked a conversation while trying to avoid eating the food that was in front of us because it had been sitting out all day.

In the end our scene was cut out of the show, which we were sad about. But overall it was a cool experience.

Here’s what you need to know if you ever want to be an extra:

Since I did that show, I have signed up for various other organizations (a quick Google search is all you need) where I have been an extra.

For instance a show on the Game Show network needed audience members, so I got paid $50 to sit all day in a freezing studio watching several tapings of game shows. They didn’t pay for our lunch, but I was smart and brought mine.

Another time I was an extra on a Food Network show, which I didn’t get paid for, but got to eat the food the chefs made on the show. That was the only time I ever appeared on camera and of course the shot was of me stuffing my face. 

If you live in the LA area (and I believe it also covers NY), the three organizations I’ve been a part of are:

You can also use Craigslist under their TV/Film job board for people looking for extras, but please be warned about scams. Again, it should not cost you anything to be an extra.