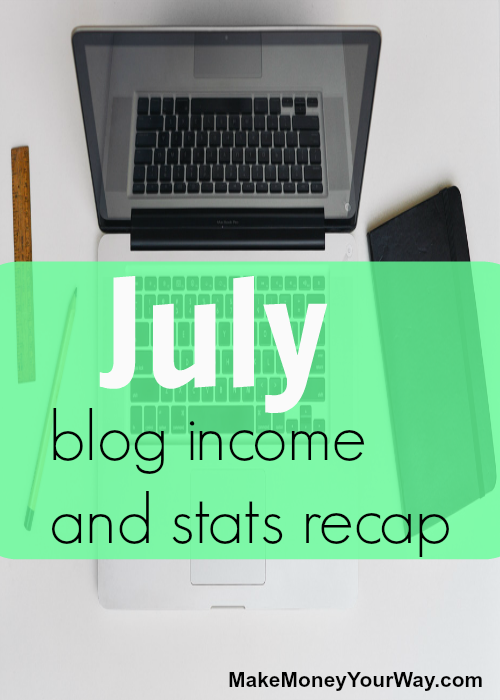 Welcome to the first blog income and stats recap of MMYW! While I hadn’t disclosed income from Reach Financial Independence so far, I will also add it here since the whole blogging thing is considered one endeavor. For example, my new VA has been working on both sites for the past months. As MMYW is celebrating one month, I also added the start up fees.

Domain registration: $10.4 on GoDaddy . I paid $156 for 9 years of RFI domain plus 6x 1 year registrations for other domains.

Theme: $0 I had bought Genesis and the Prose child theme for $89.95 last year, you can have several sites on the same theme so we are piggybacking :).

Virtual assistant and staff writing: $317. This is the first month I have a VA, she works 20 hours per week. I wouldn’t have hired her just to take care of RFI but that is a welcome help with the extra work on MMYW, which is why all her salary goes to MMYW.

Server migration: $5. That was in June too, but needed for RFI’s second year. I did it with a Fiverr gig instead of trying to figure out FTP.

Hosting: Same as MMYW, RFI had a 2 1/2 years package waiting since December, for a cost of $45

EXPENSES TOTAL $511 including 2 1/2 year hosting for each site and 5 year domain registration on average, it is the most expensive month so far.

$4,042. This is a mix of Adsense, affiliate sales, and direct advertising, plus a little income I got from my ad referral network’s commissions. Contact me if you are interested in joining the ad network! I have never had to chase payments but some people have a 28 day payment policy, I add the deals that were executed in July (you can close a deal and the person disappears but I never had someone disappear after they are due to pay), independently of having been paid or not.

All in all it was a great month, and the last Penguin update in early June brought more search engine traffic to the site, which helped too.

$0. One month old, people! I didn’t expect anything and have been procrastinating on the Adsense install so there were only a few pennies from there and not much else. I still have to check Adsense to see if the income will be split from the two sites as well.

$3,531. I was happy to still come over $3,500 considering I bought hosting for 2 1/2 years, domains for 10 years between the two,  and those expenses will not be needed for another 30 months. From next month on, it should be only the VA, staff writer, and the odd Fiverr gig if needed.

10% of blogging income will go to sponsor young girls’ education in my village, I realize I didn’t mention in my pledge yesterday if that would be the gross or the net income, and I choose gross, so my education fund now has $404! I am waiting to hear back from my neighbor about a date to go tell the students and am really excited about that project.

It was a great month for RFI, thanks to an increase in search engine traffic. All the procrastinators who hadn’t switched to another RSS reader than Google Reader also helped increase the number of RSS subscribers. And the traffic was more important than June in spite of the posting schedule being reduced to 3 posts plus carnival (from 5 posts plus carnival). I also broke 50K in Alexa 🙂 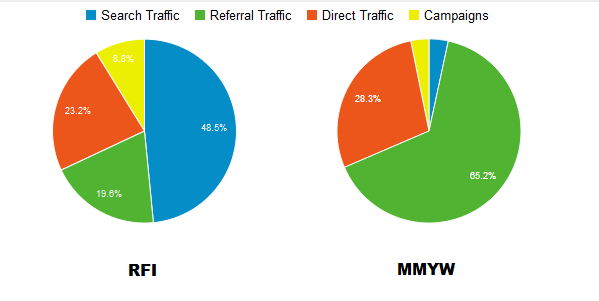 Because MMYW started one year after RFI, I will compare the stats I can find. Back in July 2012, I was blogging in a cave, waiting for the world to come and find me. I had a Twitter account I rarely used, read a ton of PF sites but seldom said hi or left a comment, and didn’t network a bit. It lasted until mid September 2012. So for the first two months, I am pretty sure MMYW will crush RFI’s stats.

Sorry about the lack of information on RFI, I installed Analytics in September when the blog was 2 months old. Even in September, a 100 unique day was considered a good day. I installed MMYW’s Analytics on July 1st and it hasn’t had a day under 100 visitors! Pretty good considering there are only 3 new posts a week. I was posting 6-7 times on RFI!

On July 1st, MMYW had over 750 Twitter followers thanks to a lot of RFI followers showing their support to my new site. The FB page launched later in July and hasn’t benefited from a SHAMELESS PLUG, LIKE MMYW ON FB!! hehe.

I am very happy about being under 250K on Alexa too, you guys rock, thank you!

This post was featured on the Gaming your Finances, Planting Our Pennies, thank you!