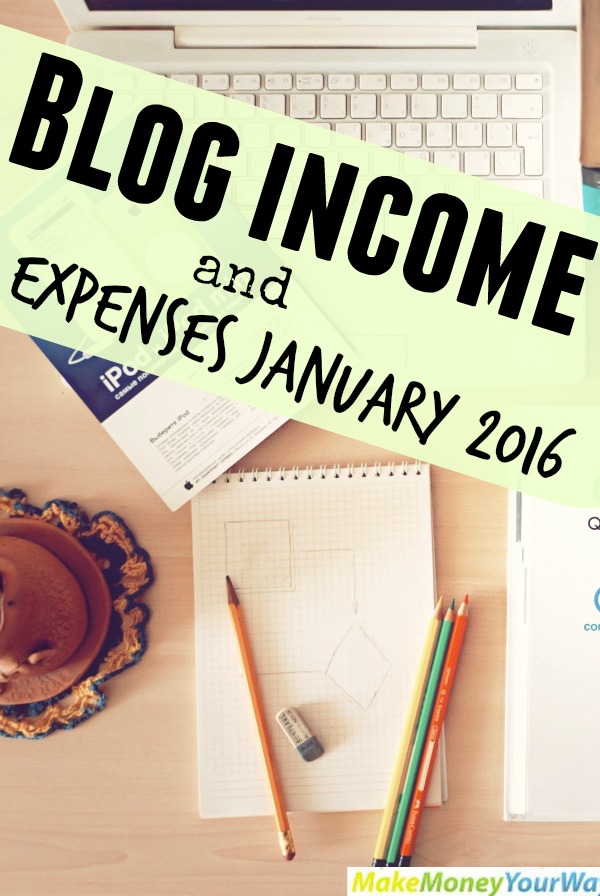 So we’re closing up this first month of January, and I have worked A LOT. Probably most of it you don’t see, because it has been about putting blogs on queue, after 2015 was a year of minimal posting and no queue, I have worked on blog redesigns for all three sites (almost there!), and I have also read a lot about this business in general, and ways to be more efficient, more engaging, and overall better.

As a result of the whole get better resolution, I spent quite a bit of money.

$810 to redesign my three blogs. That’s $270 each. For this price I am getting rid of coding errors that screw with how my text looks, getting a new logo, a new theme, etc. Hope you’ll like it! My hopes are to drive more traffic by being lighter to load, more mobile friendly, more Pinterest friendly, and look more professional overall.

$119 for one year of Tailwind to schedule pins and save the VA a ton of time.

$40 on Fiverr to format an eBook on RFI

$40 to get nice Pins for my popular posts

$82.57 to renew SavvyScot.com for the next 9 years. That’s the maximum so peace of mind + I read somewhere it’s good for Moz stats to have a long living domain.

$85.97 and $60.05 on Hostgator for two 36 months Hatchling and Baby plans. That was a 80% off Black Friday sale but they took some time doing the migration so I’m only starting to use them now. Yes, that is $2-odd a month to host several websites on the Baby plan and one on the Hatchling. Advertisers don’t like websites on the same IP so I have my three sites on three servers, but on the Baby I also host my guest house’s website, a website for an orphanage in Guatemala, and friends’ websites.

First thought was “Wow! That’s a ton of money!”. The next thought was, if SavvyScot is renewed for 9 years, that’s like having domain for all three sites for three years, hosting for three years, and a brand new look, for under $500 each. Under $15 a month. They bring thousands. That’s nothing. Neither is $1,350 to get over half a year worth of content.

I want to reinvest more of the profits to grow the sites. One idea I have implemented is to let people come to me to pitch content ideas. I have bought posts before, but I have had to give the writer the ideas. And once I have an idea, writing a post is pretty easy for me. So I’d like to outsource the whole creative process, on SavvyScot and maybe on MMYW. On RFI I’ll keep writing and hosting guest posts about how people want to reach financial independence. Contact me if you would like to share your story.

I’ve already put  a post for people to write on Savvy Scot and bought a few posts. Two posts a week at $20 a piece will cost me $2,080  for the year. I think it is a good investment to bring in more pageviews and in turn more money. It will be hard to determine how much income will come from that because I am pushing social media, guest posting etc. but the combined efforts should hopefully bring more than $2,000 over the course of this year.

Freelancing for other sites and non blogging ventures: $0. I don’t have any stable freelancing clients, I get writing and translation gigs here and there, and I have never looked for a client. I am including this line because I will start looking for guest posting on bigger sites, and many are paying contributors. I made a few thousands trading forex but won’t include that, as the $100,000 goal is only for blogging and online hustling, not trading. Had I included it I would have reached my goal.

The lowest net income since I passed the $2,000 bar three years ago. But with all these investments, I am hoping it was money well spent to improve in 2016.

As usual, 10% of that income will go to finance an education project in my village, I am in the red at the moment as the project costs about $700 a month which is well over 10% but it is going well!

What are your blogging goals this quarter?