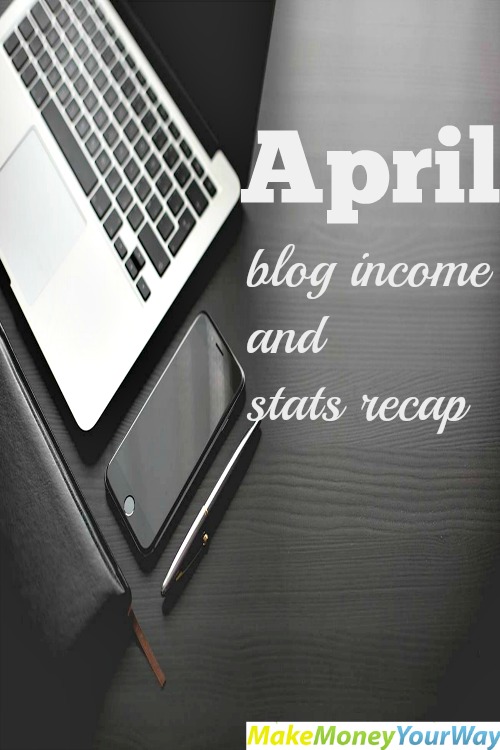 Welcome to the 10th blog income and stats recap of MMYW! Once again I am ashamed to admit that I spent very little time growing those blogs, I have had a very hectic month of April, traveling around Guatemala with friends, and juggling a ton of non blog related stuff. So close to zero time was spent on the blogs, thankfully I had some posts queued ahead.

VA and staff writing $287. I moved the VA costs over there as it is my newest website.

EXPENSES TOTAL $302. The plan is to keep it around the $300 mark for the foreseeable future.

$1,935 This is a mix of Adsense, affiliate sales, and direct advertising, plus a little income I got from my ad referral network’s commissions. Contact me if you are interested in joining the ad network!  RFI took a beating this month as I stepped away for almost 3 weeks. An unexpected writing gig saved the end of the month, but for the first time since February 2013, I am below $2,000.

$855. Under the $1,000 target for MMYW, for the second month in a row, as I have been procrastinating on a few affiliate programs there as well.

$1,805. My ego is a little sad that a site I bought is performing better than a site I started from scratch but I’ll take it anyway, at least it was a good buy.

$4,293. Another drop from last month but still pretty good considering I spent so little time taking care of my blogs.  I really need to get back on the horse though, to avoid the downward spiral. The rainy season is starting so it shouldn’t be a problem to stay in more and work! 10% of blogging income will go to sponsor young girls’ education in my village, my education fund had $5,555 – $2,196 that I spent on back to school uniforms, books, and boarding school for the best two middle school students who will go to high school for the next three years. The full spending recap is there, and we started the computer program last month, which the kids are loving. Left in the fund: $5,555  – $2,196 = $3,359 + $195 from March and $459 from April, minus April’s computer project costs and boarding school costs for two $644 = $3,369

I had the pleasant surprise while I was traveling with even less internet access than usual to see that Hostgator had decided to block my website because I had a surge in traffic and used too much bandwith on the servers. I thought it was not very clean from them since I am on an “unlimited bandwith” plan but apparently you can’t use more than 25% of the server’s resource for more than 90 seconds, and I have no idea how many visits that represents, so if it happens again I’ll think about upgrading. So I was down for 3 days, plus April has only 30 days, which partly explains the stats going down.

MMYW keeps growing slowly but surely. I am happy pageviews are up since we are down to two posts a week lately, I am trying to queue posts until mid June as I am busy with friends visiting until then, so if you would like to guest post please let me know 🙂

Savvy Scot is almost 2 years old, but had been abandoned for a few months. Now the audience is back and the site has grown quite a bit over the last month, which is awesome.